Nowadays, it’s not just about being a morning person or a night owl. Regardless of the category you see yourself in, it has come to boil down to one thing—being caffeinated in order to function. Yes, you just gotta have your java.

As society has come to demand our productivity, the coffee culture flourished, feeding this need. Coffee shops gained so much popularity that they now surround us and you’re likely to find yourself in one every now and then. Sure, you’re quite familiar and have tried some of the drinks on the menu but most can’t tell the difference between a macchiato and a latte. If you’re one of those people, you might want to read on.

Here’s a list of common coffee drinks you’re likely to encounter on the menu of a typical café and what’s actually in them:

Otherwise known as Short Black, espresso is the base of majority of the drinks you see on the menu. Despite its seeming simplicity, this concentrated coffee is quite tricky to make and requires mastery to rightfully be called a barista. This is why a lot of them take great pride in being called one. Straight espresso is ideally served in an Espresso Cup with an ounce or 1 shot of espresso.

Ristretto is a variation of espresso which is a darker, more intense version where it is extracted with water that is only half the standard amount of a regular shot.

There’s also the Double Espresso, which, as the name suggests, is a double shot of espresso that is ideally served in a Demitasse Cup. This is also dubbed as the Italian term for double, Doppio.

Café latte is considered a starter drink, preferred by new coffee drinkers as it’s less bitter and acidic due to the steamed milk added which makes the drink sweeter. Ideally served in tumbler or cup, this drink is made of 1 shot of espresso with steamed milk and 1 cm of foam. Cafes usually offer different flavored syrup as an option that may be added such as hazelnut, mint, and the likes.

Derived from the Italian term that translates as “marked,” “spotted,” or “stained,” it refers to the stain left by the steamed milk on the surface when it is poured into the espresso to create this drink.  Ideally served in a glass espresso cup, the Short or Standard Macchiato is made with 1 shot of espresso, 1-2 teaspoons of steamed milk, and optional foam on top.

Believed to have originated during World War II as a way for soldiers to extend their rations by diluting their coffee with water, Americano is quite popular. This drink is prepared with 1 shot of espresso and about 2/3 of hot water and served ideally in a glass coffee mug.

The New Zealand and Australian version called Long Black, on the other hand, is a bit more intense with 2 shots of espresso.

Served in a cappuccino cup instead of a glass mug or tumbler, this creamy coffee is similar to latte but with thicker foam and usually with chocolate powder sprinkled on top. This is prepared with 1-2 shots of espresso with steamed milk and foamed milk plus chocolate powder.

This drink originated in New Zealand and Australia that highly resembles cappuccino but sans the foam and chocolate powder. Usually served in a glass tumbler, Flat White is made with 1 shot of espresso and steamed milk.

When you need your coffee to be just a bit more intense, this is the drink for you. Red Eye is made of 1 shot of espresso, augmented with drip brewed coffee that is served in a coffee mug. Double the espresso shot to make it a Black Eye for an even more intense caffeine drink.

A delicious blend of coffee and hot chocolate, cafe mocha is made with 1 shot of espresso with chocolate powder or syrup plus steamed milk and 2-3 cm of either whipped cream or foam. Some also add a sprinkle of chocolate powder on top. This is generally served in a coffee mug.

What sets café au lait apart from the others on this list is that its base is not an espresso shot but French press coffee which brings out a distinct flavor. This is then combined with scalded milk instead of the usual steamed milk and the ratio for this combination is at 50/50, served in a coffee mug.

Preparation for this popular drink varies where some recipes call for drip coffee while some use espresso which is then mixed with milk or water. As the name suggests, this is served typically in a mixing glass with ice where some coffee shops offer flavored syrup to be added as an option.

Frappe is a version wherein the coffee drink is ice blended and topped with whipped cream plus a variety of toppings such as chocolate syrup, powder, sprinkles, and the likes.

Considered more as a dessert rather than a drink, affogato is prepared by adding a scoop of vanilla ice cream to a shot or two of espresso which may be served in a dessert dish or tumbler.

Want to test what you’ve learned? Go ahead and take your pick from our roster of Café deals and become a true coffee enthusiast. Make informed choices when you order from your beloved coffee shop.

What’s your favorite coffee drink? Share with us on the comment section. We’d love to hear from you!

Happiness: A Piece of Cake

Your Cravings into Savings: Me...

Tips on Enjoying the Samgyupsa...

Coping with the New Normal 90% Off Alfresco Dining by the Bay Promo - MBYC 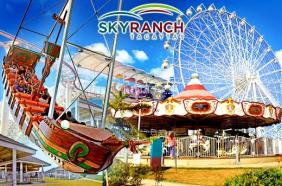